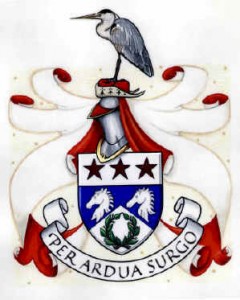 Dylan’s passion for knowledge and family values was clearly evident when he co-designed our Ahern Family Crest with Moira Murray Ahern and the Chief Herald of Ireland in 2000/2001 during our father Maurice Ahern’s term as Lord Mayor of Dublin.  Dylan’s knowledge which contributed to the design of our crest can be read below.

Coat of Arms – More common expression used describes the whole ‘Achievement'(that I sent you) named so as Knights (Gentlemen at Arms, effectively Officers of an Army) wore long white coats with their armorial symbol (cognizance) on them, mainly while on crusade, to protect their Armour and them from the heat of the sun, dust &c. also at jousts, this is depicted as the flowing robes , red and white it is also known as the ‘Lambrequin’, the colours are popular and signify Purity (white) and Honour/Bravery (Red – blood)

The Crest – The term is often mistakenly attributed to the whole achievement, such as ‘ a School Crest’, the crest is in fact the symbol (more often than not, some sort of animal or bird) on top of the ‘Helm’ aka the Helmet, it is again a cognizance of the person to whom the ‘Achievement’ has been granted , exempli gratia, the Heron is the Crest here, it is a Rhebus ( a graphical pun) on the surname in English, Ahern, i.e. A Heron. The Heron is also an ancient symbol of Grace and Honour. Again, in medieval times Knights wore such fabrications made of plaster &c. on top of their helmets as a display, not generally worn in battle but at joust.

Torse or Cap of Dignity – In general terms we come next to the Torse, a wreath of intertwined cloth again depicting the Livery (colours) of the Family in Question, the torse was worn around the Helmet or indeed sometimes as a latter-day headband. In this Coat of Arms the torse is replaced with the more honourable ‘Cap of Dignity’ some call this also a ‘Cap of Maintenance’ this was borne by Lord Mayors in particular or high officers of the Crown/State. Not invariably worn on the head but carried on a cushion in a procession – Guild/Livery companies had many such processions on feast days.  It was as the name suggests a symbol of dignity, power and position. It was scarlet velvet and ermine, that worn by royalty and the peerage. a Lord Mayor (there are only  3 in Ireland, namely Dublin, Cork and Belfast) held the powerful position of Chief Magistrate of the City, Admiral of the Port, often was High Sheriff and also in Medieval times had his own Regiment of Guards.

We notice next after the Cap of dignity, a flowing head dress to the rear of the ‘Helm’, we have touched on this before, in heraldry this would be part of the ‘Coat’ or ‘Lambrequin’, in actual fact in the past it would have been a separate garment or rather headdress  and the very early precursor of the ‘Capet-Blanche’ worn by the French Legionnaire of today. As we know much, indeed most of Heraldic science originates in France and was introduced to England as a result of the Norman Conquest and later to Ireland by the Anglo, Cambro-Normans. The Irish Chieftains eventually took to the Science adding a Gaelic flair. The colours again are the family livery, Red and white (most popular as this was the garb of Crusaders)

Coincidentally Instalment is the term used when someone receives a patent (The ‘Achievement’, Granting of Arms, Is exactly that a Legal Patent, one would notice an Official Seal on the Vellum, The Irish State Seal is as you know the ‘Arms’ q.v. of Ireland and consequently the President’s Arms and this is a Harp [‘Brian Boru’ Harp as opposed to the ‘Angel’ Harp represented on the British Royal Arms] or charge to hold important office and the ceremony thereafter.} :-

The Helm – We have mentioned this in previous instalments, The ‘Helm’ bares a resemblance to a Helmet worn in Medieval times by a Knight, What might seem like quite a simple image in fact plays a pivotal role in setting forth the actual Rank (not Militarily speaking, although not unnecessarily so, but Social Rank) of the Holder of this ‘Achievement’. The Helm here faces to the Dexter or Right (when we speak of Dexter, Right or Sinister, Left we in Heraldry speak as the Achievement faces outward) and has a simple visor (Visor which comes from Latin Vis – countenance, face. N.B Heraldry works on so many levels, Language and the route of Language i.e. Etymology plays a very functional role in the science), this ‘Helm’ with the simple visor and facing Dexter, represents the Rank of Gentleman or Esquire (Esquire comes from the Latin Scutum which means Shield, An Esquire, Squire in Olden times was an attendant , ‘Shield-bearer’ to a Knight, was generally of noble birth and apprenticing in the Arts of Chivalry till they to were ‘dubbed’ made a Knight. The Shield or ‘Escutcheon’ again from the Latin Scutum plays the main part in the ‘Achievement’ we will come to this at a later juncture.)To denote other Ranks such as members of the Peerage or Royalty the Helm will face forward and the visor will consist of a grill, the more Grill pieces the higher the Rank.